This Post is a SHOUT OUT to all Criminal Defense Attorneys, Advocates for Lifers, and Families -->  to assist  Attorney Keith Wattley with his current Objections to Board of Parole Hearings (BPH) erroneously implementing some key provisions of the  Johnson v. Shaffer  Settlement in their Proposed Regulations.

WAYS to HELP: Weigh in however you can, including writing and/or showing up at the September 2016 BPH monthly meeting in Sacramento - BPH's headquarter. Fastest is by  emailing a letter (sample below) to BPHEXE.BRDMEETING@cdcr.ca.gov or faxing the letter to (916) 322-2475.

The Board (BPH) has submitted for the Commissioners' approval at next (2016) September's Executive Meeting a draft of its Proposed Revisions to Title 15 of the Ca. Code of Regulations section 2240 (i.e. 15 CCR 2240, draft included below.) One of the key provisions of the Johnson v. Shaffer Settlement was the requirement that BPH establish a meaningful appeal process to address errors in the Psychological reports (i.e. Comprehensive Risk Assessment - CRA) used at the Parole Suitability Hearings.  These Regulations (15 CCR 2240)  were partially the subject of the Johnson v. Shaffer settlement. Unfortunately, BPH's proposed draft does not allow for these safeguard provisions. Please join Attorney Keith Wattley in his Objections to the Proposed Regulation changes.


There are many problems with this draft, but here are two of the worst:

On behalf of [Organization], I write to oppose the proposed regulations regarding Comprehensive Risk Assessments, scheduled for discussion on the upcoming September 2016.

First, we believe these regulations should provide for recording and transcription of clinical interviews – if not for all prisoners, at least for those who opt to have their interviews recorded.This is vital to ensure that the CRA process is transparent and fair. Since the current draft does not include such a provision, we find it inadequate.

Second, we believe these regulations should allow prisoners to address a far broader range of “factual errors.”As drafted, the regulations would screen out too many legitimate and important objections – in particular, objections to a clinician’s errors in reporting on statements that a prisoner has made in an interview.

Furthermore, we believe these regulations should provide a meaningful timeline for the appeals process. As drafted, the regulations would screen out a prisoner’s appeal of a CRA if not raised at least 30 days before a hearing. However, the Board is not held to any timeline for providing a CRA in the first place. Nor is the Board required to act on a timely appeal until 10 days before the hearing. This is unacceptable.

Finally, [add any other concerns you may have.....here ]

For these reasons, we strongly oppose the proposed draft regulations. We urge you to take these regulations off the agenda and to address all the problems noted before voting on any revisions.

The 4-page draft regulations are included below and available on the Board's agenda for the September week's meeting. 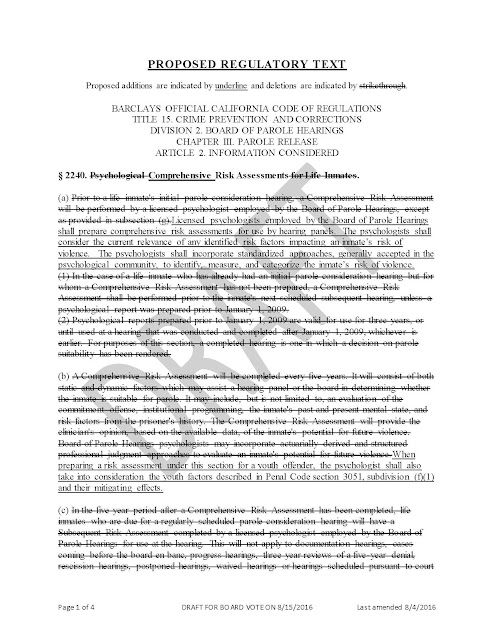 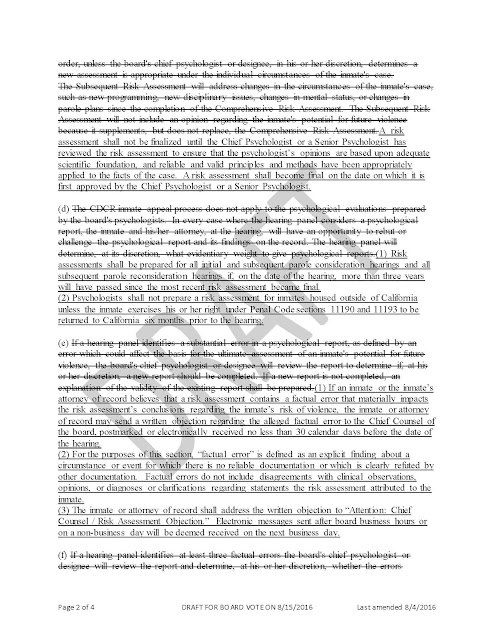 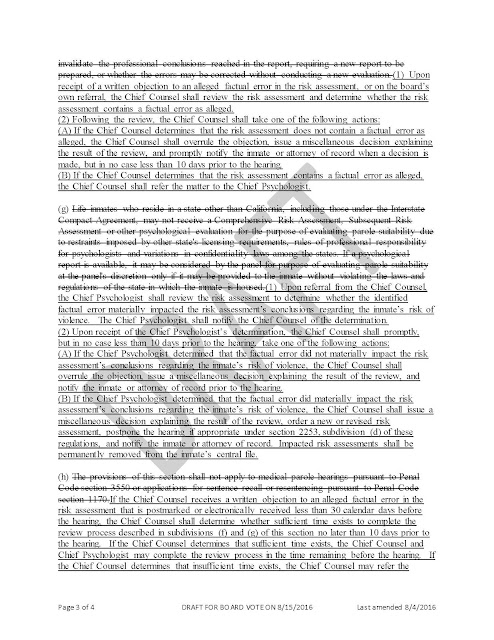 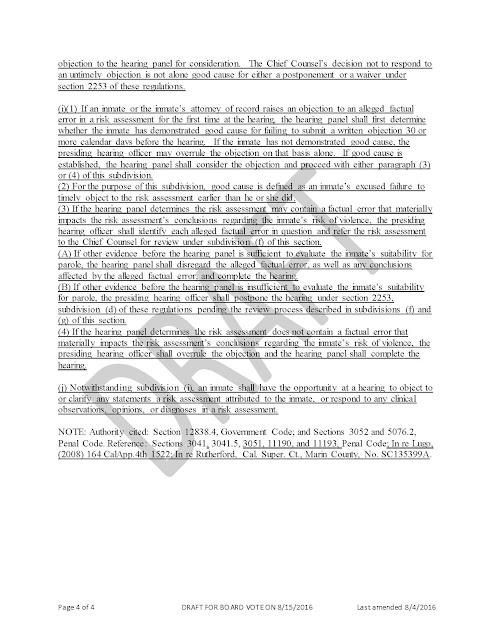 Posted by Diane T. Letarte at 9:00 PM No comments: